you’ve heard of the term “trifecta,” right? it means a run of three wins. a trio of golden moments that occur together, one after the other. a perfect group of three. in this case, trifecta means rusty faders, ewerx, and diagraf. it means the meeting point between audio, visual, and visceral: orbital mechanics.

orbital mechanics is a project that started in montreal a couple years ago. to put it simply, it’s a music venture born from a mutual love of space and sound. phil rochefort (aka rusty faders), ehsan rezaie (aka ewerx), and patrick trudeau (aka diagraf) have been friends for a long time, having met on the montreal dancefloor circuit years ago and become inseparable both musically otherwise ever since. it was in 2012 that they got together to form orbital mechanics, their musical brainchild and a melting pot of their individual talents. 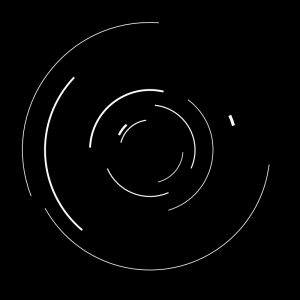 each artists in their own rights, orbital mechanics benefits from their creative energy, passion, and overt sense of weirdness. ewerx controls the group’s visuals during live performances; often a nod to the trio’s galactic inspirations. mostly in black and white, the visuals are at times a milky way of static and morphing shapes, at times a cosmos of geometry, but always keeping in tune with the group’s forward-thinking DJ sets provided by rusty faders and diagraf. think space-age techno. in a live environment, the mechanics can deliver wall-shaking full on techno with ease, effortlessly retaining a subtle injection of groove so that their sets are more than just hollow beats. their productions, like their latest EP for hungarian imprint panel trax, take on an even more cerebral quality, balancing the same hard edged techno with moments of dense atmosphere and dark, deep electronica. for their littlecity podcast, they take things down a notch (but not too far down) with immersive soundscapes and pulsating techno from the likes of zeitgeber, cio d’or, luigi tozzi, mike parker, and donato dozzy.

if you’ve ever seen this trio play out at one of montreal’s many electronic music events, you know the meaning of digital symbiosis. they work together with the gusto of artists who are also close friends, a shared connection that extends to their audience. while the mechanics have brought their magic to homegrown events like CKUT’s lo signal radio hour, eclipse festival in northern quebec, and the SATosphere in montreal, this october will see them to mexico city to present their short film, dark matter, at mutek festival. if this has piqued your interest, you can find orbital mechanics at la bacchanale’s festival after party this coming friday september 18th in montreal. for now, get lost in their mix for littlecity.