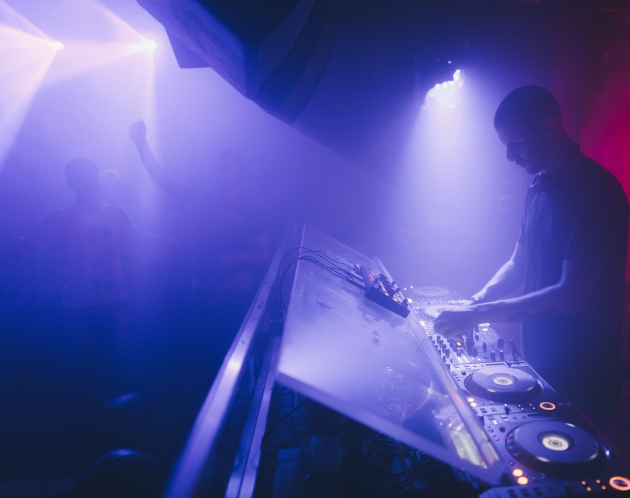 with a moniker like matrixxman, it’s no surprise that charlie duff has time on his mind. a san francisco based DJ/producer with roots in arlington, virginia, duff has only been making music as matrixxman for a handful of years, sparked by an early listen to a juan atkins mix cd. although his musical history spans hip-hop and chicago house, his techno is hard-edged, restrained, impeccably produced with the gravitas of an artist who’s been in the game for decades. an infatuation with computers, AI, and technology has led duff to a kind of intrinsic interest in futurism — a techno DJ fundamental that, whether he likes it or not, permeates everything from his DJ sets to his productions.

do you believe in time travel?

i have mixed feelings on the subject. it’s something that i wouldn’t rule out of the realm of possibility for other highly advanced civilizations although i’m inclined to think we don’t realize said technology here on earth. or that if we do, maybe it’s only one-sided — like we can travel forward but not backward, otherwise we most likely would have undone things like the holocaust, slavery, or other events that we deeply regret as a species.

in my mind it’s always been more of a “look but don’t touch” scenario — as in, we could visit other time periods, but we aren’t able to change anything.

ah yes, i hadn’t thought of that scenario! that’s entirely possible as well! maybe at that point we are aware of some disastrous repercussions that would happen if we interfered with the chain of events so we operate with the utmost discretion. that’s wild to think about because that would mean we could have already visited this time from the future and/or are watching this all unfold as we speak…

i asked because i feel like by nature of being a techno producer and DJ, it seems like you’re somehow required to think about the future.

yeah, i mean, i’d imagine that’s true — techno is more or less at the forefront of futuristic music. old model 500, or even kraftwerk, songs seem to perfectly encapsulate their particular visions of the future at that time. i don’t know if one is required to think about that stuff necessarily but it does seem to go hand in hand.

does your music encapsulate your own vision of the future?

for the most part, yes. i have always endeavored to craft something that embodies that, for sure. i guess some of the deeper stuff i did prior to going full-on techno might have had less of a conceptual connection with the future but the theme has always been present on some level… everything that comes to mind when thinking of adjectives to describe that vision, though, seems to contradict itself. but maybe that’s the point.

what do you mean?

well, in a holistic context, i enjoy exploring all parts of the spectrum; all of the archetypes that play a role in defining my particular vision of the future. sometimes that might entail something cold, alienating, anxious, and overly mechanized but then on the other hand it could be very emotive, tribal, and even transcendental.

so, in that sense, is music a form of time travel?

in some sense, yes. i have yet to successfully violate causality myself, but i suppose, metaphorically… i have most certainly visited our future. i don’t think it’s specific to electronic music either — genre doesn’t necessarily matter. it is remarkable how something like a classical piece can transport you, at least emotionally, back to the state of mind of the composer. it affords you a brief glimpse of what she or he was experiencing at that given point in time.

in general though, why do you think we’re so concerned with the future as opposed to the past? a fascination with the unknown?

that definitely plays a big factor. the uncertainty of it all is quite exciting. we might have hopes of steering things in a certain direction but ultimately we’re unable to predict how this will all pan out. all one can do is wait. but mostly i think we look to the future because the mundane world really bores the piss out of many people.

definitely. sci-fi gave me immense hope as a kid. so much to the point that i would even get depressed because many of the stories i loved were not real. not to sound overly dramatic or anything but i distinctly recall waking up late at night sometimes, eyes burning with tears in frustration at the fact that something like blade runner was not a real thing. that deep sense of yearning for the future was very powerful. it still is.

are you someone that feels at home in the now, or do you sometimes feel like you belong in a past or future era?

i tend to romanticize both the past and future depending on the mood. life during the dawn of the industrial age fascinates me just as much as visions of a distant future for some reason. with that said, we do happen to live in rather interesting times considering we are potentially within striking distance of the technological singularity.

that’s just it though. despite today’s technological advancements — musically and otherwise — we seem to be generally uninterested in the time we’re in.

indeed. it seems many people are carrying on as if it were still “business as usual” when in fact we already happen to be at an incredibly interesting point in evolutionary history, if you ask me. it’s easy to take many of the advancements we’re witnessing for granted however if one takes a step back, what’s unfolding now is astounding. i just saw a recent BBC special on genetic editing. this particular CRISPR technology has advanced to the point where we are able to finely reprogram one’s genetic coding, presumably for either enhancement or removing pernicious elements as necessary.

that could be something straight out of one of the sci-fi films you loved as a kid.

totally. self-driving cars are nearly upon us, and to top it all off, a.i. is lurking right around the corner. progress abounds yet we get so caught up in our own little microcosms that we don’t even register it. the implications of all these things are hard to fathom.

marina abramović once said that, “art has to be disturbing, art has to ask a question, art has to predict the future.” as an artist yourself, what’s your take on that?

well, i like to refrain from making sweeping assertions of art needing to be a certain way but i do see where she is coming from. a lot of art i like tends also to be prescient in some way. although someone like jeff mills or mike parker might not necessarily make hard predictions with their music in the same fashion as say for instance, william gibson with his literature, their music was, and is still, very much ahead of its’ time in many respects. so there’s that. in terms of “disturbing” i believe marina was mainly referring to the importance of art shaking things up a bit.

i think that’s the most crucial part of her analysis as well; that art functions as more than just something beautiful to look at.

absolutely. we tend to stick to our psychic comfort zones for the most part so i do think it’s imperative that art does something that pierces the surface of that, or that it challenges us in some manner to elicit a response.

it’s funny — the artist georg baselitz was presented that same quote in a recent interview, and he basically called her an idiot because the future can only be predicted through speculation: “to try and predict the future? that’s what stalin did, that’s what marx did, that’s what hitler did.”

baselitz seems to be approaching her words from a very contrarian position insofar as he heralds reflection of the past as key to moving forward. and while on one level i can totally relate to what he is saying, i also respectfully disagree as i enjoy eschewing anything that could be considered a steadfast rule. there’s more than one way to skin a cat, as it were. austin osman spare’s work has had a profound influence in terms of informing my creative intent with regard to the future.

without delving too deep into the metaphysical realm, i am fascinated by his methodology of sigils, which led me to the idea of using both music and visual art as a vehicle for expressing a desired outcome in the future. maybe this no longer falls into the purview of “predictive” territory like sci-fi but it is certainly forward-thinking in that it is depicting a vision, or a wish rather, of something that has not yet happened.

you mentioned this idea of using both music and visual art as a vehicle for you. what does your creative process depend on?

ages ago this professional sprinter from jamaica shared some knowledge that stuck with me over the years: the days you are feeling the least inspired you should still have a go at it anyway because you might be pleasantly surprised by what happens. more often than not, he said he would actually perform better than he had ever done on those particular occasions. for some reason that statement really resonated with me. it’s really easy to get in the habit of only working when one feels the urge — and some artists might even make the case that you should only be working when you “feel” it. but i have lost count of how many times something awesome just magically happens during the days i least expect it.

i interviewed a musician recently who said that she’s not able to write about an emotion she’s not feeling at the time. is it the same for you? or is imagination enough?

i would say that applies to me as well for the most part. but then again you have tunes like “protocol” which were composed without me ever having set foot inside a proper techno party, let alone a place like berghain. the impetus for that song was basically me sitting there fantasizing about drums reverberating ominously in some sort of dungeon of a club or factory. so it goes without saying, when properly harnessed imagination can be an incredibly powerful tool.

but i think experience is definitely crucial when it comes to creativity. it’s a well-known fact that a certain juan atkins wax trax mix was a life-altering listen for you; in terms of inspiration, would you value that experience over imagination, for example?

that cd played a pivotal role but i think i still would have found my way to this particular creative output one way or another. it was inevitable. unbeknownst to me at the time, most of the techstep drum & bass i was infatuated with during the late 90’s was drawing heavily from techno synths and industrial influences. the foundation was established relatively early in life. that said, juan is the truth. that cd is a lesson in the history of proper underground dance music. it still gives me goosebumps to this day.